A Coach Among His Peers 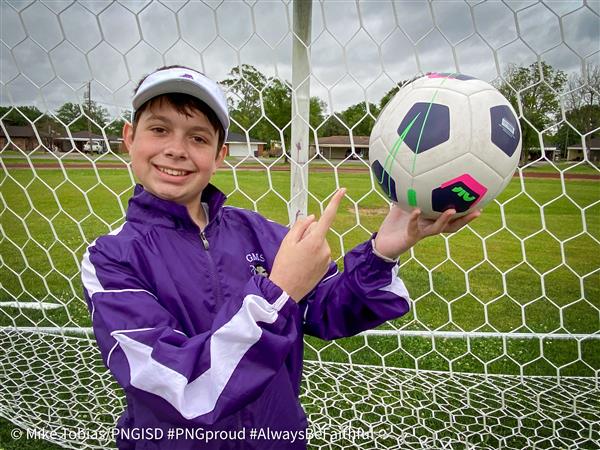 A group of soccer players gather and sit on the sidelines for the halftime break.

Some sit on the ground, some head toward the water for a drink.

Just as they begin recounting the first half of play among themselves, a lone figure walks among them and stands, clad in coaches windbreaker gear and a ball cap.

They call for quiet to listen as Coach Brennan speaks, pepping up the team for the next half of play.

“Is everybody having fun?” he asks to the players, who respond with a resounding, “Yes, sir!”

Coach Brennan is Brennan Payne, a seventh-grade life skills student at Groves Middle School. Having built a close relationship with boys coach Grant Tatum, Brennan’s inclusion with the program comes as the school is relishing its first interscholastic soccer seasons.

Both Groves and Port Neches Middle schools are in the midst of six-week seasons, with home and away games scheduled in Port Arthur and Beaumont.

Both Tatum and girls coach Jasmine Cazares had their work cut out for them in building the Groves programs from scratch. As it turned out, it wasn’t hard to garner interest.

“For boys, 60 kids came to try out,” Tatum said. “The original plan was one mixed team, but after reaching out to other coaches in the district, we were able to make one full roster of seventh graders and one of eighth.”

“We have a mixed team,” Cazares said. “My favorite thing about them is some of these kids have never played soccer ever and they’re willing to try it. Now they’re starting to fall in love with the sport. Which, to me, I think this will help build a program up for the high school teams.”

Throughout the season, Tatum and Cazares have encouraged players to think of the sport as off-season training for the other sports they play. Soccer, Tatum explains to students who never played before this year, is the best footwork training you could do.

“For basketball and football, anything is better than going home and getting on the XBox or Playstation,” Tatum said. “They’re out running and practicing and complaining about how much harder it is than they originally thought.”

Cazares concurred, saying that players would mention how hard the sport was on their bodies at first.

The acrimony disappeared quickly, she said, once it became time to receive their uniforms and play the first game.

“It was fun and exciting,” Cazares said. “Practice is practice  — but going out the first time to wear shin guards and cleats and the whole uniform — then go out on a pitch to play — they were so excited and so happy. It was fun to be a part of this new little tradition that we’re starting here at GMS.”

As the boys teams prepared for their first games, Tatum decided to offer the opportunity for a little more swag in their step.

“We sprung  a little extra change to get ‘G-Town’ written on the back of our jerseys,” Tatum said. “Once the kids saw that, they couldn’t wait to wear them. They asked to wear them to school on game days, and if you look when they’re all walking down the hall, all my soccer kids are representing the G-Town.”

Leading up to the home stretch of the season, Coach Brennan continues to be a fixture at games and practices. He serves as a morale booster for the team, giving halftime and postgame speeches to pump them up.

“Brenan is my No. 1 student,” Tatum said. “Once we got this program going, I reached out to his mom to see if he’d like to help out on the soccer team in some capacity. I didn’t want it to be just like him coming out and just sitting. I wanted him to have more of a role.”

“He’s there at every practice, with his visor and his coaching uniform, ready to go,” Tatum said. “He’s in my room at 3 p.m. wondering when we’re going to be out at the field.”

“Everyone loves him,” girls coach Jasmine Cazares said. “He’s ready to give everyone a hug.” 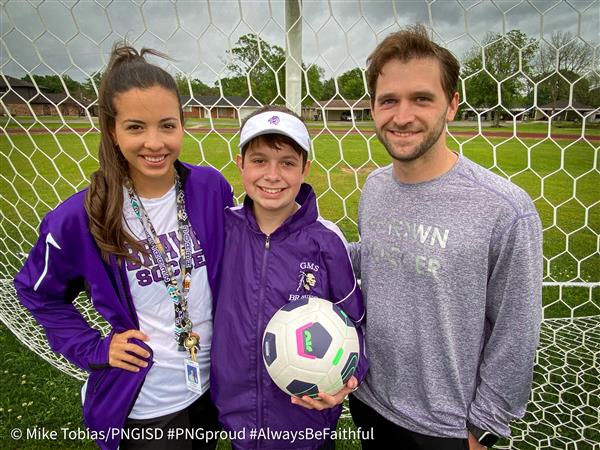 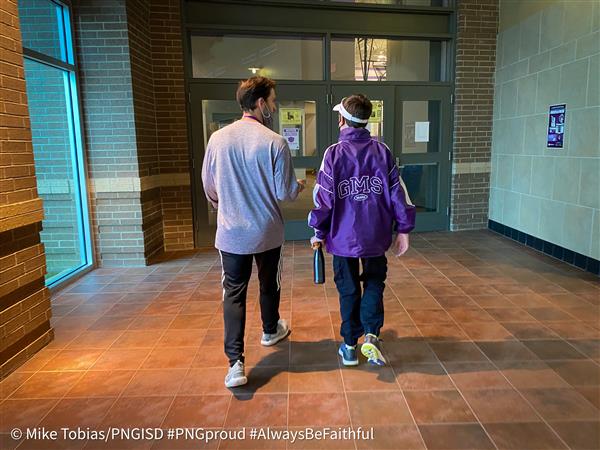