When Superintendent Dr. Mike Gonzales and Deputy Superintendent Julie Gauthier entered the capitol office of State Representative Joe Deshotel, both were still apprehensive about the day ahead of them.

The experience in Austin was already different than both experienced in prior educational visits. Gone was the heavy foot-traffic and bodies freely criss-crossing the halls and corridors. Wire fencing, health check points and armed Department of Public Safety officers instead greeted them in a more barren setting.

As they sat, however, a positive sign soon allowed them to breathe a little easier. On a desk nearby sat an object with a familiar color scheme and lettering.

It was a PN-G cup — and whatever stress the pair were feeling greatly diminished.

“At that point, it became, ‘OK — they know who we are,’” Gonzales said. “It’s refreshing to be around people with authority that understand. We’re from Mid-County, these people are from Mid-County and they understand where we’re coming from as a school district.”

The administrators were in Austin as part of a biennial visit to local state leaders at the capitol building, which is in the midst of the 87th legislative session. Among the topics of concern the pair wished to go over with the elected officials were school funding, dissatisfaction with the Texas Education Agency’s mandated reading academies, and about continuing to allow districts, like PNGISD, to have lobbyists work on their behalf.

Of similar importance was the future of the state’s Tax Code Chapter (Section) 313, also known as the Texas Economic Development Act. In Sec. 313.004, the state’s legislative intent allows for economic development decisions involving school district taxes to occur at the local level with oversight by the state.

“There’s only a few schools in the state of Texas who are affected as greatly by these 313 agreements as we are,” Gonzales said. “Because of this legislation, we get to negotiate with the neighboring refineries when they do their expansions by giving them a tax break. Let’s say, for example, one of them decides to have a $2.5 billion expansion. That’s going to make the value of their property increase, which they’ll have to pay taxes on.

“With a tax break incentive from us, they’re not going to have to pay the taxes on that $2.5 billion expansion for 10 years.”

“We explained how (1556) could hurt our school district,” Gonzales said. “Not just to (Deshotel’s) office, but each of them, and they took this into account. Some other area superintendents sent letters with me to share with the representatives, so they would be aware of everyone’s concerns and get to hear everybody’s voice.”

“But, the reason we stopped by (Deshotel’s) office first was because we wanted to personally thank him for filing the bill that he filed to continue the 313s, the continuation of the 313s which will continue to support our schools,” Gauthier added.

The opportunity to meet local legislators face-to-face was to build and strengthen the relationships with our region and Austin. According to Gauthier, it is important for educators to speak up for educators’ needs. State legislators come into session every other year, however, education becomes one of a myriad topics vying for the attention of each elected official.

The opportunity to make contact in Austin, while fruitful, isn’t the easiest for districts, like PNGISD, to do on a regular basis. Organizations like the Texas Elementary Principals and Supervisors Association (TEPSA), Texas Association of School Administrators (TASA) and the Texas Association of Secondary School Principals (TASSP) — each more approximated to the capitol — are better suited to apprise legislators of needs on behalf of the schools.

“But, again, there’s been bills filed to stop the ability of these organizations from lobbying on our behalf,” Gonzales said. “Without organizations like TEPSA, TASA, TASSP, being at the capitol — during this legislative session — ensuring that the schools are being taken care of, and ensuring that they’re meeting with all these representatives — without those organizations, Julie and I would have to be up here trying to meet with every legislator. As would every other superintendent and official trying to get their voices heard and needs met. Well, we have a school district to run, students to educate, so we can’t go and do those things.”

As their day continued in Austin, Gonzales and Gauthier met with Deshotel’s office, State Senator Brandon Creighton and the newly installed State Speaker of the House, Dade Phelan. Among items shared with the officials were PNGISD items, including hats, and an informational sheet of concerns from ours and other area districts.

“We provided them the information they needed from public schools to support our area,” Gauthier said. “And we told them if anything came up, here’s some people from PNGISD you can call and get real world examples of what legislation does to us. On paper, some things sound great, but the reality and outcome of what it does to a district is a whole other thing.”

The officials were also presented a compilation of poetry books by Mrs. Melanie Howard’s fourth grade class at Groves Elementary.

“Creighton really enjoyed that,” Gonzales said. “They were all excited about the items from the kids, but Creighton said, ‘Oh, I like this. This is the kind of stuff I like.’”

At each office meeting, Gonzales and Gauthier were met with receptive ears, treated with attentiveness and true dialogue, rather than the feel of being rushed out for more important business.

“For them to make time to speak to just one school district, and sit down with us from anywhere from 45 minutes to an hour — each — really says something about them,” Gonzales said. “They even encouraged us to keep the conversation going when we were concerned we were taking up too much of their time.”

Another facet of pleasantry was how well-versed each official and staff member were on the topics they discussed. For them to not just listen, but to be a part of the conversation was very reassuring to Gonzales and Gauthier.

The pair felt a sense of pride, too, in speaking with Phelan, a fellow Southeast Texas who assumed office in the State House in 2015, succeeding longtime representative Alan Ritter. Gauthier remembers meeting Phelan as a freshman legislator then, in a smaller office further down in the back corner of the capitol.

“A lot of his staff now were the ones we met then,” Gauthier said. “But, he has a big staff now that he’s the Speaker of the House. He was very aware of some of these issues we brought to his attention, which means that he knows about our community and what we need. So he was very receptive to our concerns.”

Sitting with a receptive and welcoming Speaker Phelan was a powerful moment for the pair, as was a statement Gonzales remembered from Senator Creighton upon leaving.

“When you twist it, you realize, this is our office,” Gauthier added. “We are the taxpayers. We have elected them to speak for us. Sometimes it can be very intimidating, but it’s such a great place to go visit.”

PNGISD Superintendent Dr. Mike Gonzales, left, and Deputy Superintendent Julie Gauthier provided photos from their trip to Austin. View some of their moments there below. 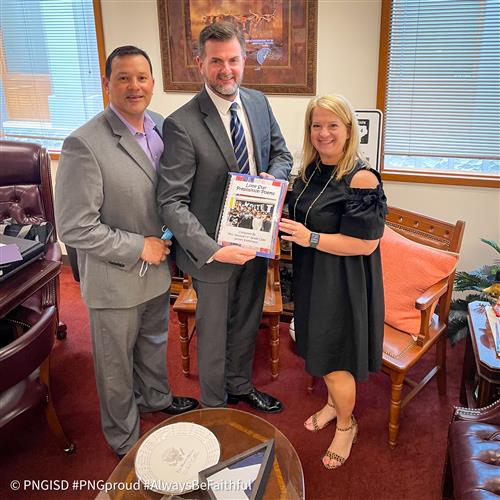 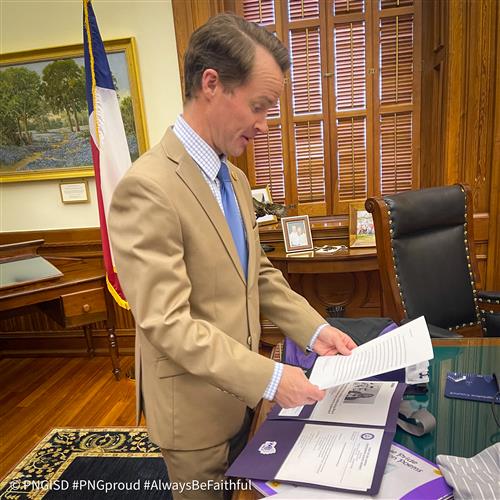 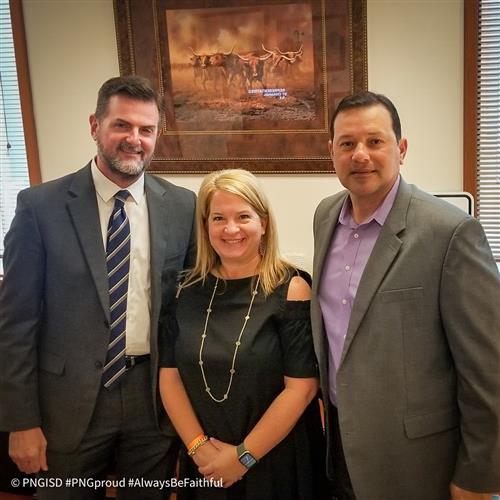 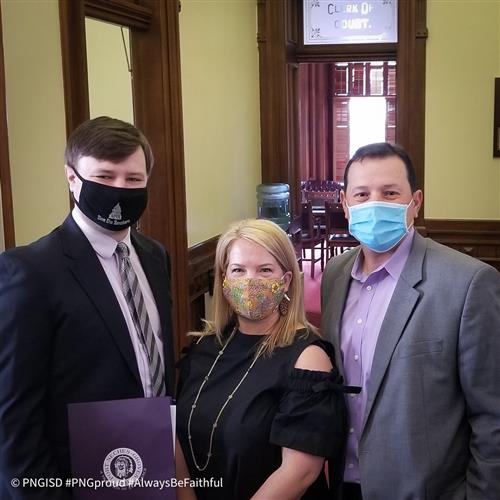 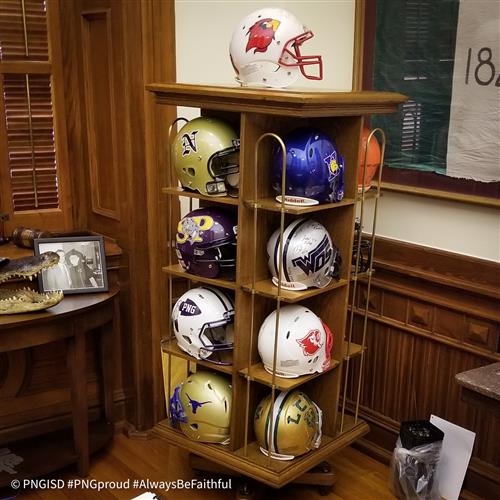 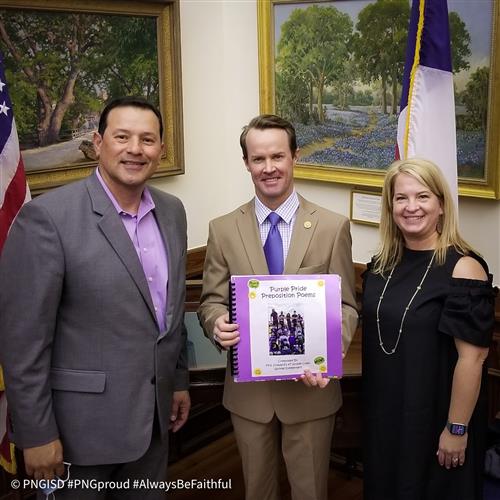 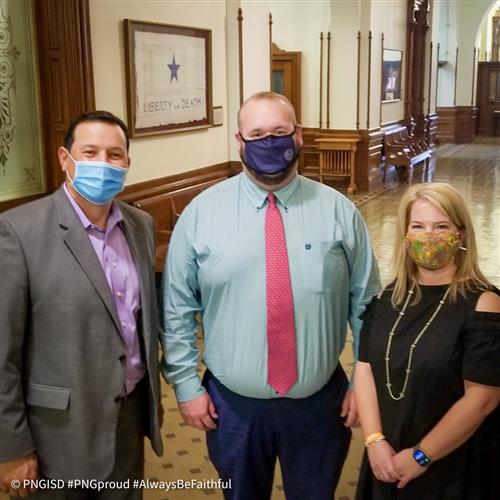 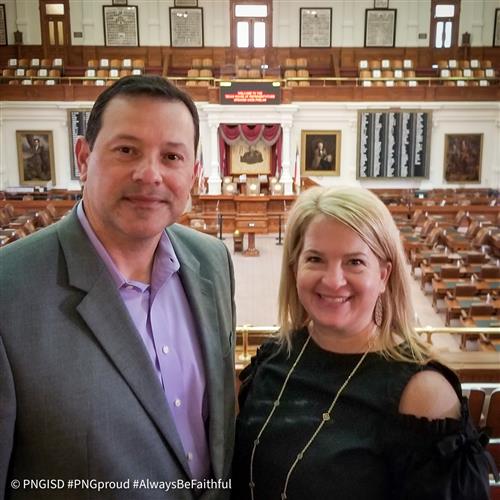 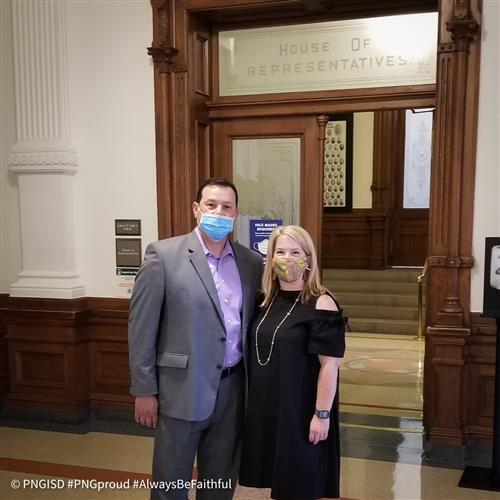